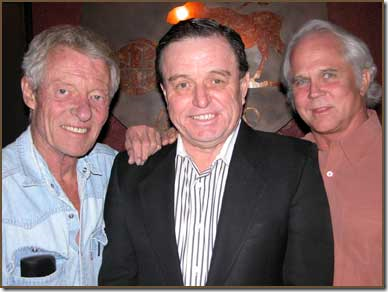 If you are anywhere near my age and you look up and see these three guys in front of you at the grocery store check-out line, you might get a little thrill!  If you are younger, you’d probably say, “who are those three fossils?”   For those who don’t know, that’s the Beaver, his brother Wally and the neighborhood bully Eddie.  Whoa – are we really THAT old??????    OK, maybe these three are a bad example of getting excited about seeing someone famous.

You have to admit they were a lot cuter back then.

Understand that I’m married.  I’m not going to get excited over running into, let’s say, Brad Pitt, at the corner diner.

Truth be told, this is a man I would actually be thrilled to see in the grocery line:  John Saladino, interior designer.   Now, a casual run-in with this man would get my elevate my blood pressure.  It takes all kinds.  I’d love nothing more than to bump into him and finagle a visit to his famous Villa di Lemma. 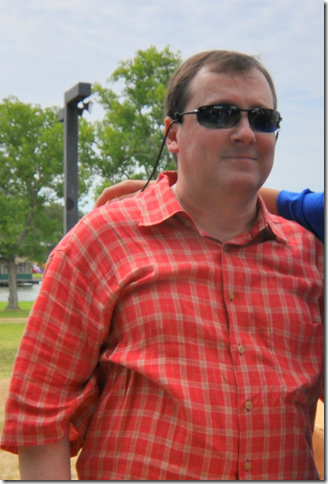 But the question of today is  - would you get excited to see THIS man at the take-out line?  Like I said, it takes all kinds.

This past New Years Eve, since Ben and I don’t like to go out that night, he decided to pick up  a “fancy” dinner to celebrate the new decade.   His choice for “fancy?”   A quail dinner at the Goode Company Taqueria.   Don’t ask.    New Years Eve was an uneventful night for us.   Elisabeth was going to a party and then sleeping over there, so it was just the two of us.   Ben didn’t even stay up for the big midnight kiss.  But I digress.   After Ben left to go pick up his fancy quail dinner  (I ordered the chili cheeseburger) I promptly dozed off into one of those deep naps where when you wake up you don’t know what day it is, much less what your name is.    So, when the delivery boy comes home all excited – it took me a while to grasp what he was saying:  “Someone recognized me!   Me!!!   Someone at Goodes recognized me!!!”

OK, slow down big boy, “tell me the story again” I say as I’m wiping the drool off my face and computer keyboard.  I’ll admit he’s cute when he gets all excited about something.  He gets real talkative and animated – not his usual m.o. 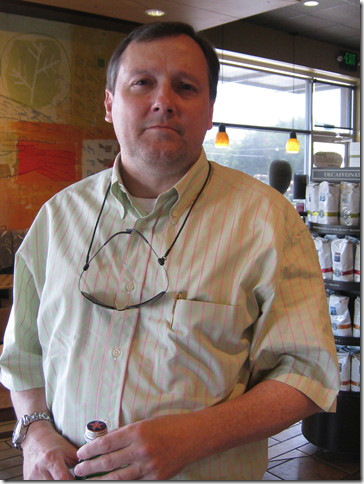 “I”m telling you someone recognized me!  I was getting ready to pay and this woman comes up to me and says ‘Excuse me, but are you Mr. Slipper Socks Man?’

Surely this is a joke.   Mr. Slipper Socks Man?   Recognized?   You’ve got to be kidding me.   No.  Really?  Someone recognized you from the blog?

“Yes!!!!  And we talked for a long time too – she was with her husband and sons, she was really nice.”  Oy.  Now I’m worried about what he actually said to this perfect stranger in the Goodes take-out line.  Certainly he couldn’t have talked about my blog, he doesn’t READ it!!!    Well, it’s alright - he is quickly approaching his sixth decade and he deserves a small thrill.  I know what it’s like to be recognized – and it is exciting!!  Houston can be a small town and I’ve been spotted a few times myself.   Recently I made a mad dash into a linen shop wearing my pajamas (they’re actually sweats,)  no make up, and I had my desperately-need-to-be-replaced glasses on.   I can only imagine how frightful my hair looked.  I was slightly aggravated when I couldn’t find what I needed and was a little curt with the very young and quite beautiful clerk.   After ten minutes of putting up with me being somewhat surly, she quietly says  “I like your blog.”   Whaaaaaaat???    Effusive apologies about  my poor manners gush out from me like a geyser as a much nicer and gentler shopper suddenly invades my body.   Yes, I tell Ben,  I do know how it feels to be recognized.    He was so excited about his New Years Eve rendezvous that it was infectious.   I was thrilled for him!  He’s a star!  Mr. Slipper Socks Man!!!   I’d created a character for him to revel in and he was practically walking on air over it all.

I’m feeling just a little bit proud too at this point.  Awww.   How cute is it?!   My Mr. Slipper Socks Man.   And then it starts to nag at me, I wonder, how DID someone know who he was?    I haven’t put his picture on the blog but maybe three or four times at most.   Still, you would need to have a real eagle eye to pick someone out like that in a take-out line, on New Years Eve, at a Taqueria no less.   And then, it hits me.  Of course!   I look down.   And I see them. 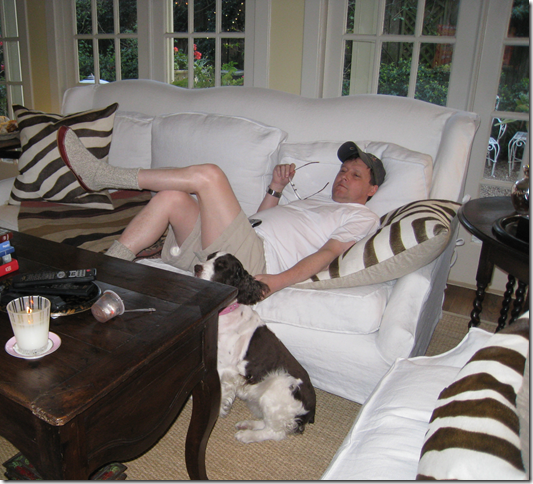 Yep, you got it!  He actually WORE his slipper socks out on New Years Eve!  Classy.  I know.  And I don’t need a million comments to tell me how classless we truly are – I totally agree.

“Are you serious?  How COULD you?  You wore slipper socks out  on New Years Eve?!  Have you no shame????    No wonder she knew who you were.  She didn’t recognize YOU, she recognized those goofy looking SHOES!”    Dufus.   I take back everything I said about it being cute.  I’ve created a character all right!    Next he’ll be wearing zip-up sweaters and welcoming everybody to his little neighborhood. 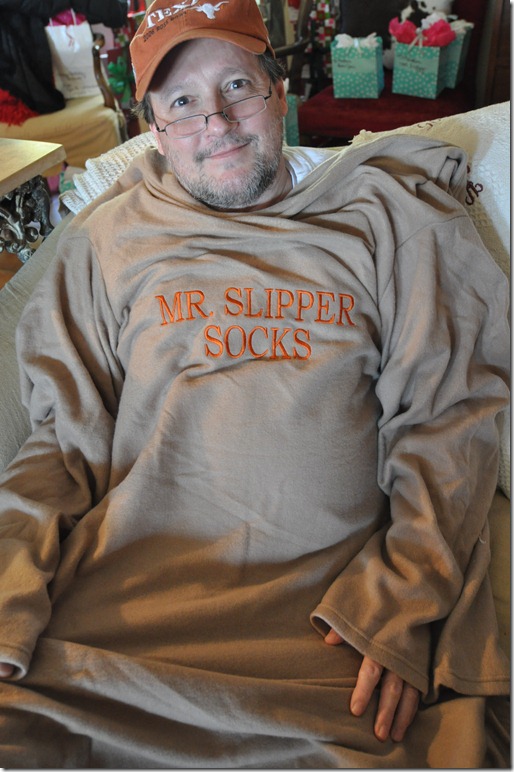 If you DO happen to see someone dressed like this in your grocery store, just ignore him, ok?  Don't encourage him.  He’s had enough stardom to last a lifetime and I’m throwing out those stupid slipper sock shoes  the minute he takes them off, if he ever does. 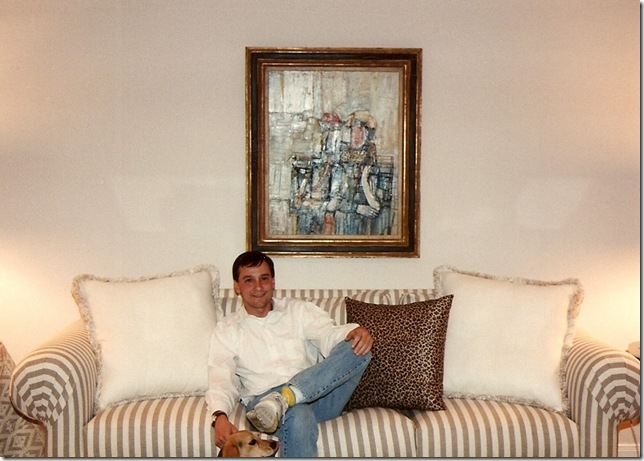 Here’s to prove to everyone that he really was a cutie when we married (and truthfully, he still is!!!!)   That’s Ben before he was a slipper socks man, with our first dog Reggie, in the first house we owned – almost 19 years ago.   The decor was blatantly copied from a Dan Carithers room I had seen in Southern Accents.  To read about this room, go HERE.

And how was YOUR New Years Eve? On to another topic.   I was so excited to come home tonight to an unexpected package from Ballard Designs!  They really do a cute gift wrap in green with a brown ribbon and a fleur de lis card.    My secret admirer is none other than the famous commenter and RMS alum Linda from Arizona.  You may know her by her aliases:  Linda in AZ and Belle’s Mom.    I’m not sure what I did to deserve such a kind gesture – but the card says it reminded her of me. 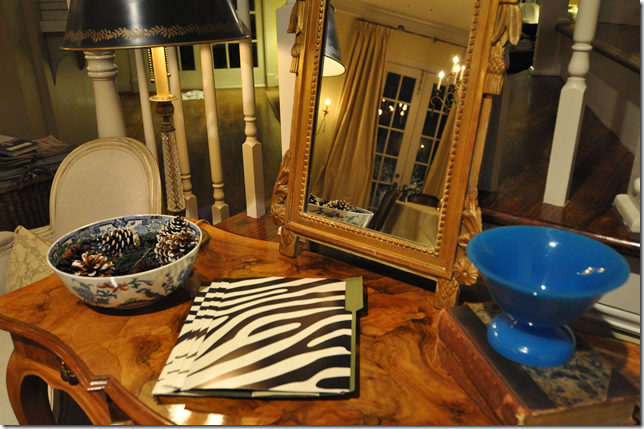 She sent a set of these adorable zebra files – and the cutest thing is they are khaki green inside.  I really needed these – so a huge Thank You Linda!  So Much!  Poor Linda has been down with a broken back, so if you see her commenting, send a get well wish her way!! 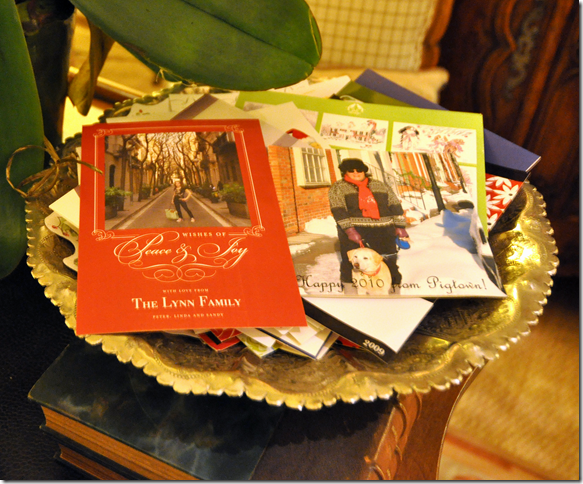 And, there’s nothing I love more than holiday cards, they truly are the highlight of the season for me.  This Christmas I got so many cards  from readers and other design bloggers, I was thrilled!!  I tried to thank everyone who sent a card – but it’s possible I missed a few.  If you are one whom I didn’t acknowledge, please accept my sincere apology and thank you!  I love all different kinds of cards, the ones with pictures of children and pets and the more serious ones with a religious sentiment inside.   I also love the typed year end recaps, where all the highs and lows are reduced to one piece of paper.    Ben and I never sent out holiday cards with Elisabeth all dressed in her season finery, which is something I now truly regret since she is too old to pose!     Hopefully she’ll do it with her own family one day and I’ll look forward to seeing my grandchildren all dressed up in smocked dresses and suspender shorts! 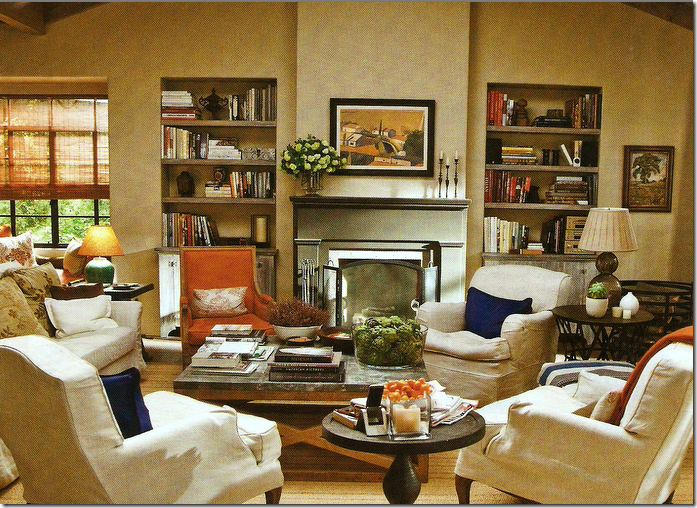 Finally, don’t forget to listen to this week’s Skirted Roundtable HERE with House Beautiful editor Stephen Drucker.   So far, all the reviews have been mostly very positive – so don’t miss out, especially if you are a fan of the magazine.  We have a special surprise coming next week – I’ll just say two words:   It’s Complicated!!!!

Posted by cotedetexas at 5:50 PM